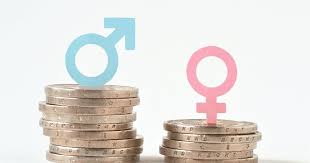 The gender pay gap is evident in almost everything we do- athletics, jobs, home life, etc. But I want to touch on one aspect of the gender pay gap and that is sports. There is an obvious unequal pay in sports, particularly for female athletes who do not receive the same revenue as their male counterparts. Sports are sports, life isn’t perfect so we can’t expect sports to be perfect too, but I do expect sports to at least be fair. Athletes, especially at the professional level are so passionate giving everything they must what they do. It’s a job. Its how they get paid. Now the fancy cars, huge houses, multiyear contracts, and more can grab the medias attention but its typically the men showing off. Why don’t we see more female athletes?

What is the gender pay gap in sports?

The gender pay gap is the average difference between the remuneration for men and women who are playing a professional sport. Although there’s no proven way to calculate the difference, we do know that across the board women tend to earn less than men. For sports specifically women earned only 88 cents for every dollar their counterpart made. Every year, Forbes publishes a list of top 100 paid athletes in the world and for the first time in 8 years a female athlete did not make the list.

A main question surrounding this issue is, why? Why is there a gender pay gap? Men’s sports tend to be more popular. There’s no sexism there, its facts. Football is the most watched sport in the entire country. In January 2020 an article came out stating American football, baseball, and men’s basketball are the top three most watched sports. Because these three sports are the most watched, they bring in the most revenue which means they get the most money back for their work. The super bowl, the world series, and march madness bring in billions of revenues just by themselves. I don’t want to discredit women’s athletes; they work hard and deserve equal pay.

Wage differences means that one player earns more than another. They do exist!! In the sports world case, men make more than women. Wage inequality comes into play because this means when two individuals in a company do similar work at the same level of qualification yet are not paid equally. A prime example I can think of is soccer. There’s a men’s and women’s team for the united states, they practice the same number of hours, have the same chance to qualify for the world cup or the Olympics, they are driven by the same passion, yet men get paid more. What’s CRAZY about this sport is that the women’s side of the national soccer guard is statically proven to be so much better than the men’s side. The USWNT has made an appearance in 8/8 world cup tournaments and won 4/8 of them. While the men have won zero tournament, struggling to even qualify. Again, the women’s national team have made six appearances at the Olympics for soccer and have won four of those! The men? Zero. In 2016, the women generated $1.9 million more than the men but only about a quarter of that was given back to the women. They generate more revenue but are yet to be paid the same amount.

Where is sports is this pay gap happening?

There is different level of athletics; recreational activities when you’re younger, college athletics, and professional athletics. We tend to see the pay gap in two major areas- the college level and the professional level. These two bring to light very different forms of this discrimination. Title IX is the equal rights act for athletics. The education amendments of 1972 prohibit discrimination on the basis of sex in education programs receiving federal financial assistance. This law opened doors and removed barriers for girls and women while female athletics still have fewer teams, programs, scholarship’s, lower budgets than men, the Title IX has helped women grow tremendously for all levels.

At the college level athletes do not get paid directly but they are given the chance to earn a scholarship. Also, male and female coaches are paid differently. The NCAA defines itself as “The national collegiate athletic association is a member-led organization dedicated to the well-being and lifelong success of college athletics.” There are 1,098 colleges and universities, 102 athletics conferences, and three NCAA division schools. I see this pay discrimination is coaches, athletes, and other staff. There a pay difference in university size, success, and gender. I cannot ignore the fact that bigger schools will inevitably get more money, that’s just how athletics works. But men’s and women’s sports at the same schools should be given an equal opportunity. We all know march madness is one of the biggest tournaments in college athletics, an article written by Melissa Anent shares her insight of the discrimination between men’s and women’s basketball.

“Women’s basketball head coach Geno Auriemma (Coach I) made $1.95 million in 2014-2015 while men’s basketball head coach Kevin Ollie (Coach II) made $2.8 million (Mussatto 2015). The gender pay is not only an issue in athletics; the gap exists throughout the marketplace and has persisted for many decades. Identifying the source of the pay gap is the first step in eliminating unjustifiable differences in any occupation.”

The pay gap is most shocking in professional sports. Today, the richest male athlete is Alex Rodriguez with $350 million while the richest female athlete is Serena Williams with a net worth of $180 million. Serena Williams barely makes half of what Alex Rodriguez makes. In an article written by Michelle Kaufman, he shares that this gender pay gap is much bigger than we realize. He enlightens us that outside of tennis, the gap is unbelievable. For example, Jackie Young, the top pick in 2019 WNBA draft, will make around $53,500 base salary while Zion Williamson, top NBA draft, signed a four-year deal worth $44 million. The highest paid salary in the National women’s soccer league is $46,200. The highest salary for Major league soccer is $7.2 million. Yes, you read that right. Brooks Kopka, PGA golf champions, lists $9.51 million while Jin Young Ko, LPGA golfer, is the top earner for women’s only at $2.28. These are just some of many cases where women earn significantly less than men for competing in similar tournaments and activities.

“In terms of pay equity, the glass is certainly less than half full,” Kane said. “It’s not a difference in degree, it’s a difference in kind because it’s millions and millions and millions of dollars versus hundreds of thousands of dollars. That said, if you look at the long arc of women’s sports, the fact that they have professional leagues is something that has moved the needle. But men’s sports had an enormous head start culturally, socially and economically. Comparing women’s leagues to men’s is like comparing a start-up company to Apple or Microsoft.”

In 1970 the first ever appeal was made by Billie Jean King, tennis ledged. After winning the tournament in Italy she was only paid $600 for taking the women’s title. The men’s winner was rewarded $3,500. In 1973, King threated to sit out of the U.S Open unless the prize money was equal to the men. It worked. This was a significant moment for her because at only the age of 12 Billie had experienced gender inequality. This was a long time coming for her, and very well deserved. In order of raising awareness for gender equality, Billie Jean King accepted a challenge to play a match against former number one ranked tennis play Bobby Riggs. He claimed the women’s game was so inferior to the men’s game that even someone as old as he was could beat the current top female. This match quickly became famously known as “battle of the sexes”. Billie Jean beat Bobby Riggs and earned the winner take all prize of $100,000. 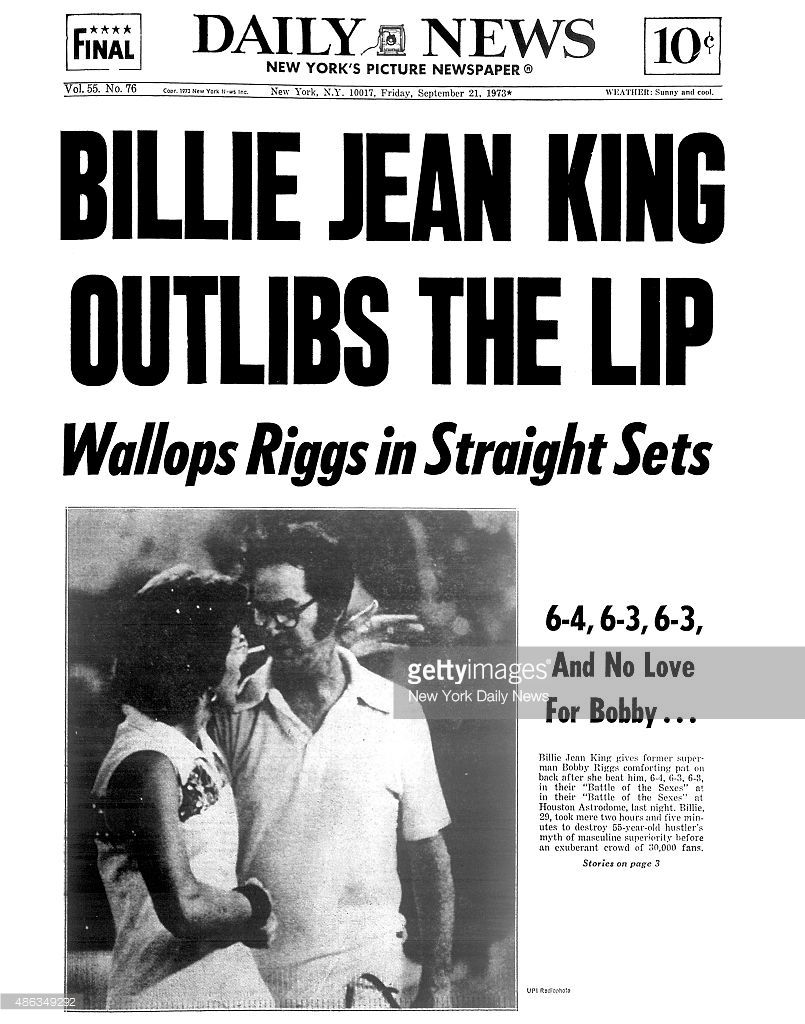 Megan Rapinoe and the USWNT

Star midfielder for the US Women’s National Team, Megan Rapinoe, is a very well-known advocate fighting against the pay gap. She has led the rest of the soccer team to stand up for what they do. All 28 players on the team- mind you, the greatest women’s soccer team in the world- filed a gender discrimination lawsuit against United States Soccer Federation. Even the men side of the federation stand behind the women’s team in this fight. The team and the USSF president are currently butting heads about how much their making. The soccer team is still going to war for what they believe. They even started a slogan “equal play, equal pay”. After the team won the recent World Cup championship in 2019, they chanted for equal paying rights. This team is fierce and blunt, not afraid to speech out. Megan Rapinoe said, “This is so much more than the money.” She wants to make an effect on the corporation and the world as a whole to step up. All in all, she wants to raise awareness about the beautiful game and how powerful it can be.

What can you do to be more aware?

Having an educated opinion about this controversy is important. If we aren’t talking about what’s going on and make it a conversation, it’ll just go away. Many athletes want to take a stand, but they can only do some much. It’s important to be involved and get to know this issue.

Base pay off hard work

Yes, lots of women are fighting for their fair share but it means very little if its just handed over to them. You must work hard for what you earn. And that’s true to everything we as humans do. We must put in the work, to get out the desire goal and prize from it.

Similar to the real world and outside of sports, we as women must be each other’s biggest supporters. WE build each other up and WE got each other’s back. We must be in unity; greater numbers bring greater strength.

Do your best for future generations

What do you want this world to be like for your children and grandchildren? Do what you can today so they can have a better life in the future. They didn’t have it as good as we do now and that’s because our roll models growing up did everything, they could so we could have the luxuries of sports. 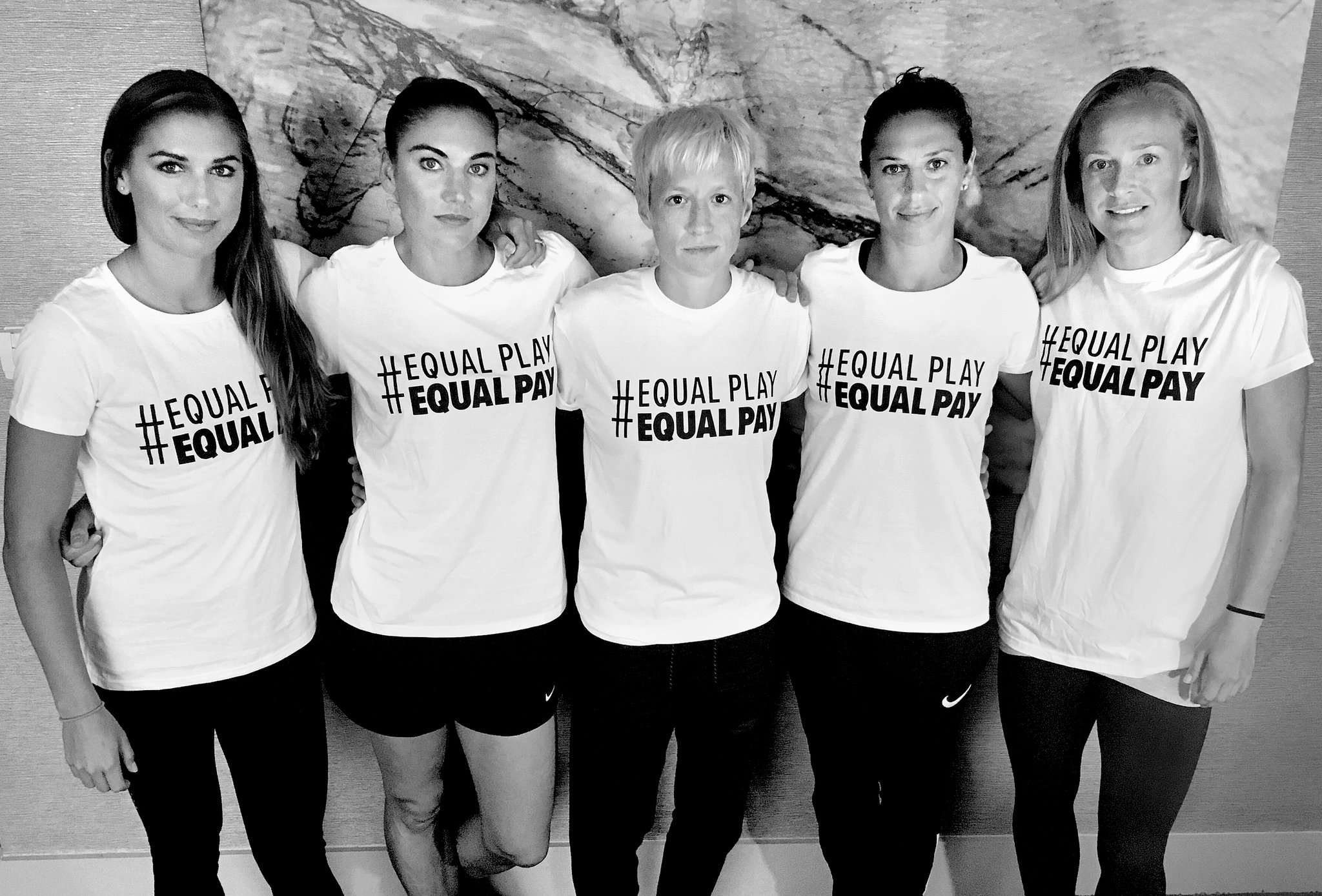